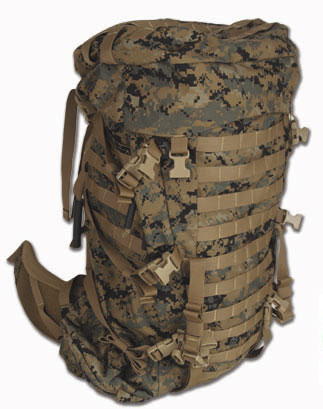 The ILBE (Improved Load Bearing Equipment) system is the design of choice for current members of the US Marine Corps. The ILBE was created by Arc’teryxs Law Enforcement and Armed Forces program and is currently being produced by Propper Inc. The ILBE system was created in response to soldiers needs while in Iraq.

The system was designed to replace previous packs such as the ALICE and MOLLE backpack systems in order to improve the load bearing ability while also decreasing the volume of the pack. It is also the first pack to have the ability to carry mortar rounds on the external area of the pouch, a growing need for combat situations. It is comprised of three main parts. The main pack is able to carry up to 4,500 cubic inches and is used as the primary storage area of the pack itself. The system also includes a detachable assault pack, designed for rapid detachment and ease of mobility, with a 1,500 cubic inch storage area. The final piece is a detachable CamelBak hydration system which can hold up to 3 liters of water for use in extended combat or survival situations. The ILBE backpack system is also compatible with the Pouch Attachment Ladder System (PALS) giving it the added flexibility to be used with more compact modular additions.

The ILBE pack has three possible configurations to suit the Marine’s needs at the time.

Currently providing the most effective combination of mobility, storage capacity, and workable volume, the ILBE system is the pack of choice for Marines and will continue to be so until combat and survival needs require a modification.

Click on any of the ILBE pack pictures below to get a closer view.