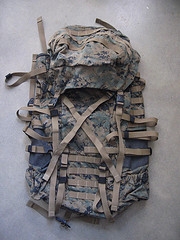 One would think that a country’s soldiers would be afforded the very best equipment that could be provided them. Up until the gulf war, the fighting men of America had the best training in the world, some of the most advanced weaponry, but the worst backpacks. In the field, the warriors packs are their home and everything for their comfort, survival and efficiency must be carried on their backs. 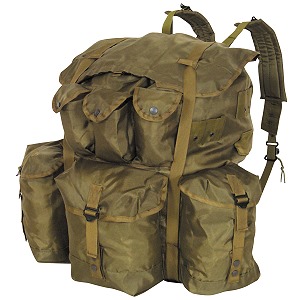 Throughout World War 1 and World War 2, the packs carried by the soldiers were nothing more than bags with straps sewn into them. They were made from cotton, they became saturated in the rain and their carrying capacity was limited. The evolution of the army’s backpacks was slow and in the early 1980s, the ALICE pack was developed. Although an improvement over the preceding models, the full packs on long marches became uncomfortable and chafing. Uncomfortable soldiers are inefficient soldiers and being miserable is a good road to failure.

After the assault on the United States on September 11, 2001, the army started the Rapid Fielding Initiative to equip our fighting forces with the best state of the art equipment to enhance their mobility, lethality and survivability in the fields of Afghanistan and Iraq. As part of this initiative, the MOLLE pack was developed.

M.O.L.L.E. stands for ‘modular lightweight load carrying equipment’. It is constructed of 1000 Denier Cordura, it has an external pack frame, a shoulder strap assembly, waist belt and a quick release.

The main rucksack is 3000 cu in. and houses the Gortex sleeping system, night vision goggles, gps, personal items and body armour. There are pouches for grenades, a hydration bladder that eliminates canteens and there is a separate assault pack to carry extra ammunition.

The US soldiers give this pack a five star rating; it is comfortable, efficient and with the addition of separate snap on accessories, the pack can be just the ticket for backpackers, hunters and hikers. 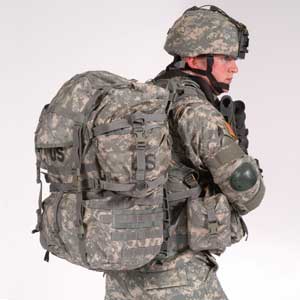 MOLLE, pronounced ‘molly’ and short for MOdular Lightweight Load-carrying Equipment, is the current load-bearing and rucksack system used by the US Army and Marine Corps. It was introduced in 1997, but got more widespread use after the September 11th, 2001, attacks.

The Development of the MOLLE Carry System

In 1994, the United States Army began to search for a replacement for the ALICE (all-purpose lightweight carry equipment) backpack that had been in service since 1973.

The Center for Military Biomechanics did a study comparing the ALICE with commercially available, off the shelf, packs. It was found that the commercial packs volume configuration and the location of the center mass of the load was superior to ALICE. In tests with a 75lb load the commercial packs proved superior in energy used and deviation from the optimum posture. 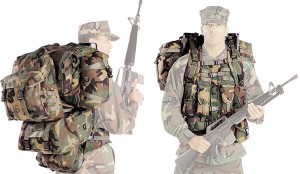 All these concepts were incorporated into the new pack prototype developed at the Armies Soldier Systems center.  Technological advancements also allowed them to replace the ALICE packs aluminum tube frame with an anatomically contoured plastic frame. The plastic frame increases durability and extends the temperature ranges in which the backpack system can be used (-40F to 120F).  A weight-bearing belt was added to the system and the MOLLE (Modular Lightweight Load-Carrying Equipment) backpack was born.

With the exception of a six month test with the 25th Infantry Division MOLLE packs did not see widespread use until 2001 and early 2002. Approximately 200,000 of them were issued during that time to United States Marines.

In 2003, the army began issuing them to soldiers deploying to Afghanistan.

The MOLLE system was designed to be versatile.  It can be quickly adapted for different missions or an individual soldiers needs.  There are also different equipment configurations for each man of the squad including a rifleman, pistol, squad automatic weapon, grenadier, and corpsman configurations.

The three basic components of the MOLLE system are:

The MOLLE backpack is worn as much as carried. And a lot of that functionality revolves around the MOLLE load bearing vest.  The vest is made of a nylon mesh to keep it light and prevent overheating.  The vest is covered in PALs webbing, so soldiers can attach pouches for magazines, grenades or whatever other equipment they need to carry.

The vest is connected to the rucksack with an quick release system that allows the soldier to drop the heavy pack under combat conditions.  The idea is that the soldiers supplies and non-combat gear can by dropped, while all the fighting gear is still attached to the vest.  This way the soldier can become much more maneuverable in combat conditions.

The main rucksack contains a hydration bladder, a large outside pocket suitable for a Claymore mine, two detachable side pouches (sustainment pouches) and a removable internal radio pocket. There is also a sleep system carrier which can be attached to the frame below the rucksack. The main compartment has ample room for equipment and gear.

It has a weight-bearing belt that distributes the weight of the main rucksack from the back and shoulders to the hips.

A smaller assault pack / patrol pack is also available, and can be used by itself or attached to the main rucksack when added load carrying capacity is needed.

The vest and packs are covered with PALS (Pocket Attachment Ladder System) webbing.  PALS incorporates rows of heavy-duty nylon webbing which allow for the secure attachment of different pouches and accessories. As a result different configurations of the vest can be made for different duty positions, and the vest can also be quickly modified in the field to meet the requirements of a specific mission.

The MOLLE backpack and vest the first to use this type of adaptable system.  Since the introduction of the MOLLE backpack, this type of system has been come widely used with both the military and civilians.  Now days you find it on tactical vests and hunting gear.  Because of this, sometimes the PALS webbing is called molle webbing, and the compatible accessories, molle equipment.

Field Use and the Resulting Upgrades

Since the original MOLLE pack was introduced there has been the need for several design upgrades. This led to the MOLLE II.  A quick release clip was added and the butt pack was replaced with a waist pack. Combat conditions in Afghanistan also showed that the zippers on the pack were to weak, and would burst when full.  Additionally, the shoulder straps were to short to be worn over body armor.  So the designers went back and revised the pack.  They added stronger, locking zippers and longer shoulder straps so the MOLLE backpack can be worn comfortable with body armor.  These upgrades have ensured that the MOLLE will remain a integral part of the soldier’s equipment for years to come.

So when you are looking to buy a MOLLE backpack, you should keep in mind that there are different generations of the pack out there.  The later generations are going to be the improved versions of the backpack.