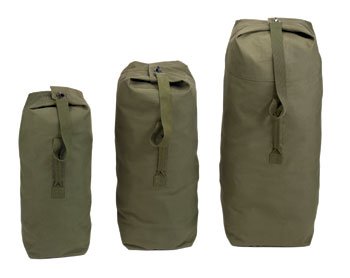 Military duffle bags have a unique and lasting history. The name duffel, comes from the town of Duffel, Antwerp Belgium. In the fifteenth century the town of Duffel began the manufacture of a heavy cloth that was tightly woven. In 1611, they began to export the cloth by ship to Spain and Portugal. Portuguese and Spanish sailors first used the cloth to repair sails. then because of the tight weave, they began to make sea bags, for protecting their belongings from sea spray.

It was during World War I, that the term, duffel bag was first mentioned. The poet E.E. Cummings, was serving as an ambulance driver in France. He wrote a letter detailing his experiences with the military in 1917, and mentions the term, duffel bag. The actual date that the American Military started using the duffel bag, is unclear. It was during the beginning of World War I. The ‘Doughboy Duffel Bag’, was a tan color, with brass eyelets, and a rope cinch. They were shorter than the duffel bags of WWII, about 18 inches long. Hard to carry when loaded, they were often left behind by soldiers in the trenches.

After WWI and before the onset of WWII, the military issued ‘Barracks Bags’, for soldiers equipment and personal belonging’s. These were cloth bags, with rope closures. They were not very practical for traveling or combat.

In 1943 the military again made a change, the ‘Duffle Bag’ as we know it began to be issued. Made from olive drab (od) no.3 canvas. This canvas duffle bag was supplied with 2″ web straps, which made carrying heavy loads easier. It measured 37″ x 12″ x 12″. Closure was made easy by the placement of metal eyelets and a central grommet. It could either be locked with a padlock, or simply secured with end of the shoulder strap.

No matter the distance from military duty, the mention of the words duffle bag, will always bring on memories.