Probably the most common use in the military for camouflage netting is primarily to hide equipment and high value assets that could normally be seen easily with the naked eye. From a distance the landscape simple appears to have extra hills to the naked eye when camouflage netting is used, in effect making items invisible or hiding them in plain sight. Not only has camouflaged netting been used by the military to hide items, but it is also used as a diversion along with decoy aircraft, tanks, and artillery that are made from wood and sometimes even cardboard in order to entice the enemy to a location other than where actual military equipment is being stored.

Currently in the Middle East there are even large hangers that appear from a distance as if they are part of the many sand dunes on the landscape. This article will neither give locations or implications as to where these locations are but let’s just say they are in technically strategic locations for both offensive and defensive operations. 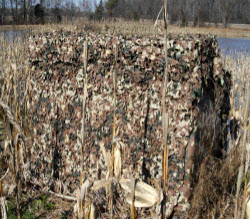 Personally in my 20 + years of service, I have learned many of the different effects and uses that camouflage netting has and it truly is a remarkable item. Depending on the terrain, I’ve seen things virtually disappear from as little as 300 feet away because of the use of this material, there are more advanced nettings and uniforms in development that will enhance the invisibility of both equipment and personal even as I write this article. Some of the principles behind the new camouflage netting is to have thousands of reflective membranes embedded within the material to create a chameleon like effect in which your uniform or camouflage netting blends into the background almost identically.

Besides the usefulness of such equipment for the military it has plenty of practical uses for individual and home security as well as local law enforcement officers. In addition to this technology, some service members have already received training in another technology that allows them to virtually shoot around corners allowing them to stay safely barricaded when drawing enemy fire.