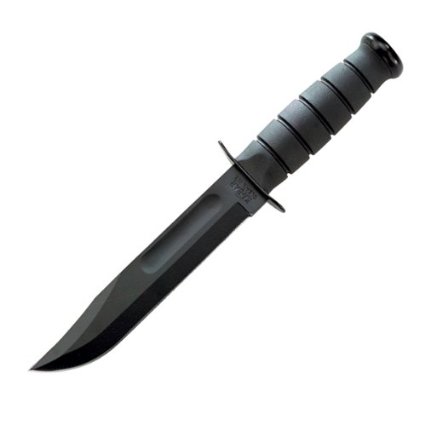 The USMC knife (designated USN Mark 2 Utility Knife) was designed and produced for the United States Military during World War II. This Knife design was manufactured by four different cutlery companies, one being the Union Cutlery Co. Union Cutlery Co. ricasso stamped their knives they manufactured with their trademark KA-BAR. Soon the USN Mark 2 Utility Knife was nick-named the KA-BAR, regardless of the manufacturer. This knife being well liked during World War II soon became a popular knife thereafter, and has been used in every military conflict since. This knife is has now become a favorite choice of hikers, campers, hunters, and survival enthusiast.

The USMC Fighting Utility Knife is made in USA. This knife is made of great craftsmanship using only quality materials.  This knife is 11-7/8 inches overall length, with a 7 inch fixed blade which can be used for bigger task such as chopping wood to skinning a deer.  It is a full “Tang” blade going through the handle, this make the blade harder to break and more durable. (USMC) Fighting Utility Knife, is made of carbon steel of 1095 Cro-Van and the blade being 0.165” thick sharpened to a 20 degree angle that comes to a clipped point. This steel is great when heat-treated it has excellent properties such as strength, toughness, and resistance to wear and fatigue.  Weighing in at .70 lb it is light weight to carry nicely on your belt.

The handle is made of leather strips with groves in between for a  easier grip.  The USMC is ricasso stamped near the handle guard. The blade comes black powder coated to resist corrosion and doesn’t reflect light.  This knife has other defining features such as a blade guard, capped handle, blood groove and a top swage taper ground tip.

The sheath is sturdily made of oiled leather and comes with a large belt loop. This knife has a military version sheath that is MOLLE compatible. It can be used for hand to hand combat, carving, chopping, splitting wood and other camp task.  The USMC knife has a rich military history with great quality used the world over.